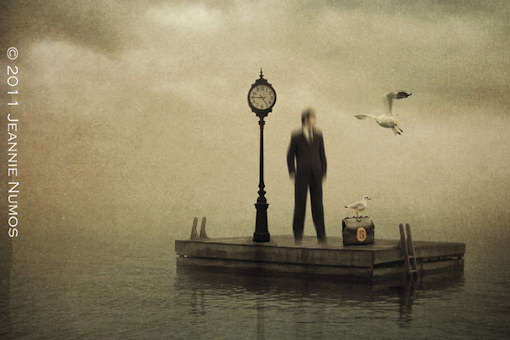 The mysterious Men in Black (MIB) are an alleged secret intelligence agency known to visit and harass UFO witnesses and investigators. In most cases, they use threats and demand that their victims destroy evidence and keep their mouth shut about what they know or saw. Some believe the MIB are actually extraterrestrials/aliens.

Below is a very strange, but rather well documented case about a UFO researcher who was visited by an MIB agent. It’s the terrifying story of Dr. Herbert Hopkins, who was threatened by a strange visitor who didn’t seem to be entirely human. Hopkins was involved in a UFO case at the time.

Dr. Herbert Hopkins was a respected family physician from Old Orchard Beach, Maine. On the night of September 11th, 1976, Hopkins was home alone. He was studying a UFO case that he also acted as a consultant for. The case was just starting to gain traction in the local news and attracting a lot of attention to Hopkins.

The phone rang and the man on the other end of the phone introduced himself as the vice-president of the New Jersey UFO Research Organization (this later turned out to be a fake organization). The man inquired if he could come over to Hopkin’s house to discuss the case in detail. Oddly enough, the man also asked if Hopkins was alone at the time.

Hopkins agreed and went to turn on the porch lights so the man could find his way up Hopkin’s front steps. To his surprise, the man was already on his way up the steps, just seconds after the phone call. Keep in mind this was before the age of cell phones and other such technology, so the man must have phoned him from a nearby location.

“If he was even as close as across the street or next door telephoning, he could not possibly have gotten here as soon as I did to turn on the light for him“, Hopkins claims.

Hopkins reports the stranger had a very odd appearance. He was wearing a freshly pressed black suit, black pants, black socks, black hat, grey gloves, and a white shirt with a solid black tie. He looked like an undertaker.

The mysterious man took a seat near Hopkins and removed his hat. His head was bald. He didn’t have any hair at all – not even eyebrows or eyelashes. Hopkins said the man’s skin looked like smooth, pale plastic. It was as if he was wearing some kind of “costume”.

The stranger sat almost perfectly motionless and spoke only in monotone speech with no inflection or expression. In short, he spoke like a robot completely devoid of any emotion.

As they chatted about the case, Hopkins noticed every once in a while that the strange man would brush his mouth with the back of his glove. When the stranger moved his glove away from his face, there was a lipstick smear on it. The man was wearing bright, ruby red lipstick. Hopkins said it also appeared like the man had no lips. The lipstick was just meant to give his small slit for a mouth the appearance of being human.

Hopkins was incredibly frightened both by this man’s appearance and demeanor at this point, but it gets even weirder.

The mysterious man instructed Hopkins to take a coin out of his pocket and place it in his [Hopkin’s] hand.

The man spoke: “Watch the coin.” As Hopkins held the coin in his hand, he noticed it turned from copper to silver and then bluish. Eventually the penny became fuzzy and blurred. It quickly went out of focus and then simply vanished completely out of sight, right before Hopkin’s eyes.

“Neither you nor anyone else on this plane will ever see that coin again“, the man threatened.

Following this strange display of magic, the man ordered Hopkins to destroy all the information about the UFO case that he had and to never speak of it again.

Hopkins said at this point the man appeared weak and that his speech was slowing down. The stranger unsteadily stood up, a bit shaky and looking frail. He left Hopkins with one final cryptic statement:

He slowly crept over to the door, looking like he was about to fall over or collapase from weakness at any second. He descended the front steps one at a time and then walked to the end of the driveway.

At the end of the driveway was a bright, bluish-white light. The man walked into it and vanished. Hopkins later recalled he thought it may have been the strange man’s car but he never heard a car engine or saw the car itself.

After this horrifying encounter, Hopkins destroyed all evidence of the case.

Interested in learning more about the MIBs? Here’s some suggested reading materials we think you’ll enjoy:

The Real Men In Black: Evidence, Famous Cases, and True Stories of These Mysterious Men and their Connection to UFO Phenomena

Men in Black: The Secret Terror Among Us