Mysterious Structure in Wales Might Be Older Than The Pyramids 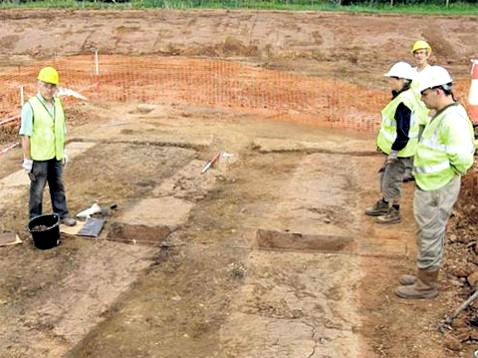 The Unearthing of a Mysterious Structure

Archaeologists digging in Monmouth, Wales have unearthed the remains of a mysterious, prehistoric structure that experts are saying could be older than Egypt’s pyramids.

The team was digging a housing development when they found the bulky feature consisting of a series of criss-crossed trenches that appear to be the timber foundations for a very large structure.

Experts say the structure could date to at least the Bronze Age, but is most likely early Neolithic. That would it make it approximately 6,500 years old. An impressive 2000 years older than the pyramids in Egypt.

The huge sleeper beams appear to be made from entire tree trunks and set next to an ancient dried up lakebed. They are more than 50 feet in length and 3 feet across (see picture above).

Current speculation is that the structure is the foundation for a Neolithic long house or a platform built over water-rich soil. Nobody is quite sure, however, just what the platform was used for. Even more mysterious is what kind of building once sat atop this structure.

Carbon dating is currently being done on the struture to determine it’s true age.