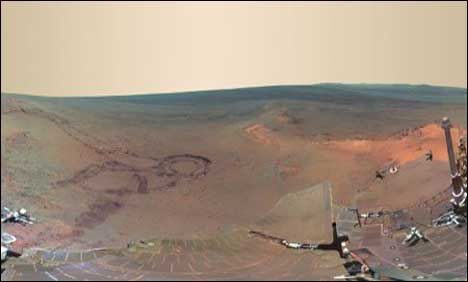 The freshly released panoramic picture of Mars combines 817 images taken from the panoramic camera (Pancam) on the Mars Exploration Rover, Opportunity between December 2011 and May 2012.

Scientists at NASA say the image shows the terrain that surrounded Opportunity while it was working for 4 months during the Martian winter. They also claim, “it’s the next best thing to being [on Mars].”

Opportunity has been present on Mars for an impressive 3000 Martian days. In the full-circle panoramic you can view rover tracks, an old impact crater, and – most of interesting of all – the eerie alien landscape.

It looks very similar to regions on our own planet including the Austrlian outback and the US Southwest.

Here’s a video of some of the images: