What appears to be the ghost of a baby was caught on camera in a Cheltenham, England household (the creepy image is located below). 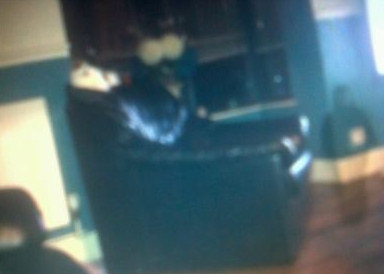 The ghost can be seen on the right side of the picture, standing next to the couch.

The image belongs to John Gore and Sonia Jones, who got more than they bargained for when snapping a simple picture on their iPhone.

They had the following to say about the strange photo:

“I have never really worried or had any ghost sightings before. We have had a few strange things happen before, like the TV kept changing channels and turning itself off.”

“I showed it to a lady over the road who has lived here for years.”

“She said somebody who lived in the house before us had a child who died of cot death.”

“It is hard to tell whether it is a boy or a girl, but we have called the ghost Jonny Junior, and it looks to be about a toddlers age.”

Quite strange, indeed. What do you think?