Ghost in The TV

This photo was sent in to me by one the Demontales.com readers, along with this letter.

“After a quite exciting evening of digging through my massive collection of old photos, I’ve finally managed to find the picture I mentioned in the forum. Not much of a story behind it, besides the fact that it was my eleventh birthday (that would make the year 2002) and my cousin and I were having a ‘fashion show’. The tv was turned off and the only people in the room were my cousin, me, and my mom, who was taking the photograph. We thought it might have been reflecting some of the various photographs on the opposite wall, but the faces don’t match and seem too clear to be reflected anyways. Nothing fancy about the area, either. It was in an apartment building that was built in 1995, and we were the first people in that apartment. Before that (way before) the area held an old tannery, but that’s all I know of the history.

I’ve edited the picture so my cousin and I aren’t recognizable, but other than that it is untouched.” 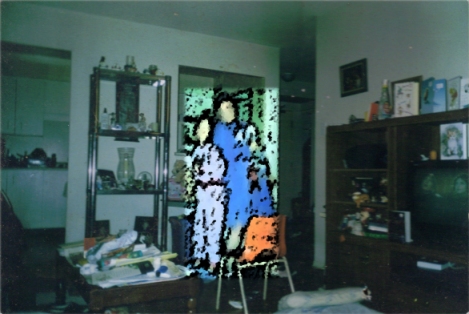