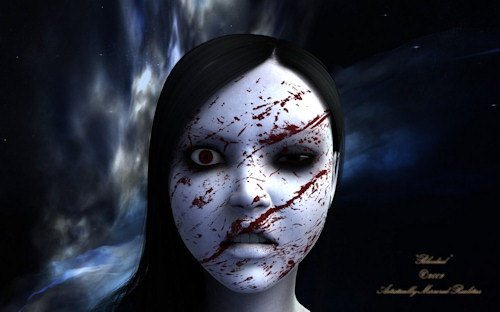 Here’s a reader submitted ghost story coming from Ann in a small midwestern town [specific location removed at author’s request]. It tells of her chilling encounter one autumn evening with the Phanton of Red Lady Bridge.

Ann also talks a little bit about the legend surrounding the bridge and why the locals believe it to be haunted. I hope you enjoy this creepy ghost story as much as I did. On with the show:

Hello my name is Ann. I am writing you today to share a ghost legend in my town that centers around a certain bridge… I also had my own encounter there which I will tell as well.

First and foremost… the legend starts in the late 1800s. There was a young woman who lost her husband when he fell off a bridge and died. The young widower was unable to cope with the loss of her beloved and went insane.

According to the legend she spent weeks out on the bridge… refusing food, water, and assistance from passerbys. I guess the local townsfolk said she could be seen drinking from the river and eating grass along the banks. She eventually died during one rather cold autumn night in late October since her body was in such a weakened and malnourished state.

When her body was found, she was wearing a red scarf which gave the bridge it’s official name of Red Lady Bridge… prior to that the bridge had no name.

Red Lady Bridge is now said to be haunted by her ghost and she can be heard crying out her husbands name over and over on nights in late October… well, thats the legend and here’s my strange story:

I was driving over the bridge late one night in October 2011 when my car engine suddenly died. I believe it was at about 3am. I don’t know anything about cars, so I just called a towing company on my cell phone. They said they could be out there to get me in about an hour or so… great, so I was stuck.

While I was waiting for them to arrive… I got out of my car and sat on the hood to take in some fresh air. I began to hear talking… more like mumbling… that seemed to come from under the bridge.

After about 30 seconds, the soft mumbling turned into screaming. It sounded like a woman in great pain. I crept over to the side of the bridge and I shouted down in the darkness to ask if they were okay. I didn’t get a reponse… In fact, the screaming just stopped suddenly.

I turned around to get back into my car and that’s when I saw it. On the edge of the bridge I saw a strange ghostly woman… extremely skinny and pale… I could see her because she was faintly illuminated by the headlights of my car. She had a red scarf around her neck and was turned away from me, facing over the side of the bridge. She sounded like she was crying.

I was frozen in fear… I can’t even explain it. It was at that moment I knew the legend surrounding the bridge was more than just a story told to children to frighten them… it was the real deal.

The ghost eventually vanished into thin air. Everything was quiet again. I got back into my car and locked the doors and windows and prayed the tow truck would arrive quickly.

Eventually they did show up and I got home safe and sound. But, this is one encounter I will never forget. I haven’t been back to the bridge since… and refuse to drive along that road anymore.

Thanks for that great ghost story, Ann. It sounds like you had quite the paranormal encounter!

Want to read more stories like this? Check out our great collection of paranormal and ghost stories.