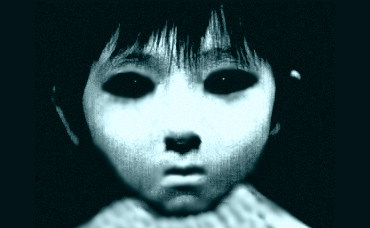 What are these being with soul-less black eyes and an incredible confidence? Theories range from reptilians to vampires to demons. Whatever they are, they are making one thing crystal clear: nobody is safe from their torment. Not even YOU.

Lock the doors, shut the windows, and enjoy this creepy tale…

It was warm the night Carris Holdsworth walked to her apartment from a friend’s house in Lisburn, a city of 71,465 in Northern Ireland near Belfast.

Then 18-year-old Holdsworth didn’t know terror waited for her at home.

“It was about 10:45,” she said of that night in 2009. “I was only 18 and had a small flat in a very rough part of the neighborhood. That’s why it unsettled me when I saw two boys standing in my small patch of grass which I called my yard.”

The boys one about 16 years old the other 13 or 14, stood with their backs to Holdsworth.

“I edged around the corner, and as if they knew I was there, both turned around to face me at the same time,” she said. “They were just merely boys.”

As the teenagers turned to face her, she felt more than just unsettled.

“I felt raw fear when I laid eyes on them,” she said.

Holdsworth stopped a few yards from them, a fist in her handbag wrapped around a tin of pepper spray.

“I was ready to defend myself if one of them made any sudden movements,” she said.

But they didn’t. They seemed to know what she was thinking.

“No need for that,” the older one spoke, calmly and maturely. “We just want to borrow your phone, miss.”

Her knuckles began to turn white as her grip tightened on the pepper spray.

“They looked like any other teenager around these parts,” she said. “Hoody, jeans and grubby trainers (running shoes). But while the older one spoke I zeroed down on his eyes – they were pitch black. No trace of white or pupil at all.”

Further depths of terror rushed through her.

“I made a silent gasp,” she said. “It was as if I was in terrible danger; that I had to get away. My heart rate went off.”

All she knew at that moment is that she had to get inside her apartment.

“I didn’t know exactly what to do, so I marched towards my flat door, ignoring the two boys,” she said. “I fiddled around quickly in my bag trying to find my keys.”

“Please miss,” the younger boy said from behind her. “My mother won’t be happy if she doesn’t know where we are.”

Something pulled at her mind, to let them in, to help them.

“I wanted to obey them at first considering that they were young,” she said. “But seeing their eyes took me away. I just had to get away from them both and I knew if I obeyed them I was going to seriously regret it.”

“I couldn’t get my words out,” she said. “My hands hit my keys and I swiftly opened my door and slid in. My heart was banging against my chest.”

Shaking, Holdsworth fixed a cup of coffee, sat on the sofa in her living room, turned on the television and tried to calm down.

“I didn’t bother to check if they were still there in case I stared into those soulless eyes,” she said.

A knock sounded on her front door.

“I ignored it. It knocked again,” Holdsworth said. “I felt in real danger.”

She stood and padded to the front door. Everything was silent for one second, two, three, then knuckles on the other side of the door rapped out three loud knocks.

“It scared me, making me jump back a few steps,” she said “I was grateful that my door was completely made of wood. I looked through the peep hole and almost died.”

“Both of them staring at me with those pitch-black eyes,” she said. “The horrid feeling of dread completely overwhelmed me.”

“Miss, we won’t hurt you. We promise,” one of the boys said.

Anger momentarily overwhelmed Holdsworth’s fear and she threw open the door. The boys stood in the doorway, grinning at her.

“What do you want?” she demanded.

“We want to use your phone,” the older one said.

“Just let us in to use the phone,” he said. “We won’t hurt you. We have no weapons to hurt you with.”

“Get away from my flat,” she shouted, then slammed the door in their faces.

Safely behind her solid wooden door, Holdsworth looked back through the peep hole. The boys still stood there, but they were no longer smiling.

“That feeling of utter terror and danger ran through me,” she said.

She went through her apartment, made sure every door, every window, was locked, then picked up the telephone.

“I called my friend to come around that it was an emergency and I needed her help,” she said, calling a friend other than police because she didn’t want to draw attention to her apartment.

“When I opened the door I couldn’t help but hug her,” Holdsworth said. “She told me two boys were standing in my yard but they left once she arrived. She said they made her feel in danger.”

Holdsworth has since moved to a different neighborhood, but the terror of the night of the Black-Eyed Kids stays with her.

“I always check through that peep hole before I go to sleep,” she said. “I don’t know exactly what those boys were, but I do know they meant me harm and that they weren’t human in any way. I still get scared thinking about it.”

Source: From the Shadows