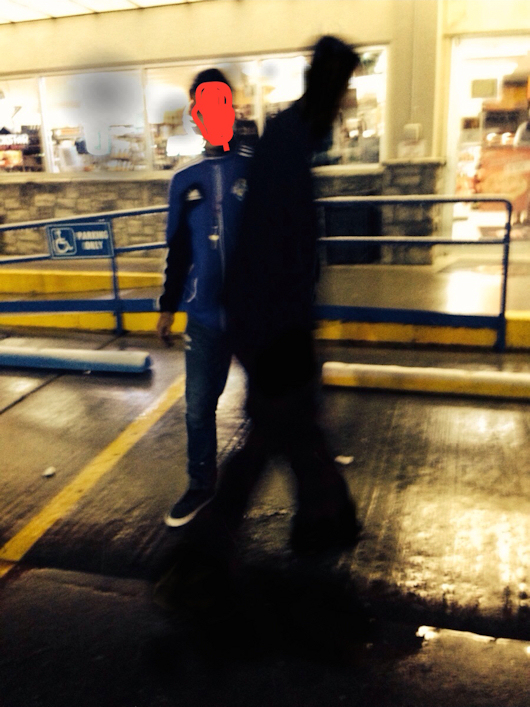 I got this true paranormal story via email from a reader who prefers to remain anonymous. He writes in to tell me of a friend of his named Jose who had a spirit companion whom protected him. Joe was able to command the spirit to perform some pretty amazing things as you will read about below. Above you can also see the photo that was attached with his story which shows Jose and his “protector”. This is the paranormal story I received, as told by our anonymous submitter:

A few years back I played college soccer and one of my teammates, we’ll call him Jose, had claimed that he could “connect with the spirit world” and other stuff. Naturally, most of us thought he was crazy until he set out to prove to us that he could. He’d tell us that he had a demon “protector” named Deeney and that he would do anything he asked him to. While I cannot actually prove any of this stuff happened, I do have a few experiences of which I can share with you.

In an effort try to catch him in a hoax, me and a few of my other teammates coerced Jose to make Deeney move something in the room, to which he obliged. All four of us were waiting for about five minutes making jokes about how he’s not real and such until a box of plastic cutlery flew from a shelf and hit our teammate in his side… needless to say we were spooked. On one of our away game trips we were staying at a hotel and Jose for whatever reason was in the mood to scare us all that night. He began telling Deeney to move stuff around the room, turn the tv on and off, and at one point even touched some of our teammates.

I was honestly always skeptical of this kind of stuff but the kid did some pretty crazy stuff that I can’t explain at all. Jose would wake up with tons of scratches on his back and stomach, things placed in mysterious places, and just other random occurrences. At one point he could even pass out and then somehow levitate about 6 inches of his bed. Things got bad enough where his roommate couldn’t even sleep in the same room as him (I don’t blame him). The kid was a good guy and great soccer player, he just had some scary stuff going on with him.

That was a pretty amazing paranormal story! A special thanks to the reader who submitted it. What do you guys think? Leave us a comment and let us know. Also, be sure to like this post on Facebook and tweet it out to your friends if you enjoyed it. Thanks for visiting Demontales!