NASA Solar and Heliospheric Observatory (SOHO) has photographed something deep in space that even they cannot explain. A ship that is orbiting the sun! 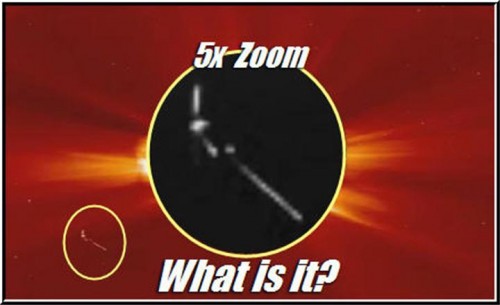 Pictures and video from NASA show what seems to be a giant UFO mothership hovering around the sun. But, how can a mere ship withstand the sheer temperatures of the sun without simply melting or bursting into flame? And more importantly, what is this alleged alien ship looking for in such a dangerous proximity to our sun?

Is their technology so advanced that can simply ignore the dangers of solar radiation and the intense heat of Earth’s greatest star? Can they really get that close to a burning star?

Experts are saying there is no way this is just a camera malfunction or “space vapor”. The ship is too perfectly designed and seems to have a certain higher function about it. The ridges and grooves seen in the pictures and video are leading people to believe this is no mere rock or dust. It’s a real ship orbiting the sun.

The video is located below. Take a look. What do you think SOHO has captured?